It’s Saturday morning, June 27, 2020, and our busy week bringing in Beautiful Estate Furniture continues this morning with our truck and team heading out soon to another pick up! 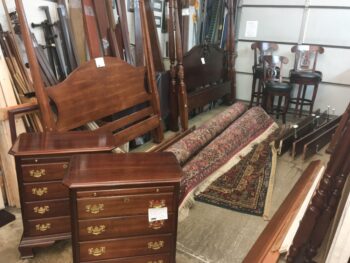 While wearing our masks adds difficulty, everyone at Cornerstone is certainly happy to be open again! Better still, the regular spring “moving season” has finally arrived as homes go on the market and get sold. That’s where Cornerstone steps in and helps with the furniture that no longer fits into our clients homes! 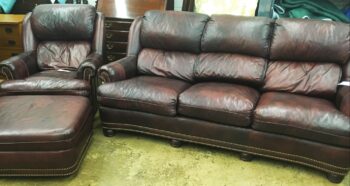 Pictured in the top photo is part of a Kincaid Solid Cherry Bedroom Set that features a King Poster Bed and a pair of Tall Bedside Chests! There are also 2 Karastan Rugs on the dock along with other Queen Poster Beds that recently arrived to the store!

The next picture is of a 3 Piece Leather Set by Hancock & Moore- One of today’s premier leather makers! 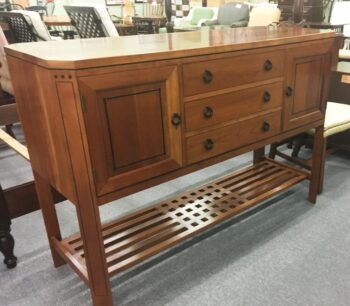 Continuing down the page, you’ll see several pieces of Stickley Furniture that arrived this week! We have 3 Pieces of Mission Oak Office Furniture- 2 lateral files and a two door cabinet. We also have a leaded glass china cabinet and the matching sideboard. These two cherry pieces are from Stickley’s 21st Century Collection. 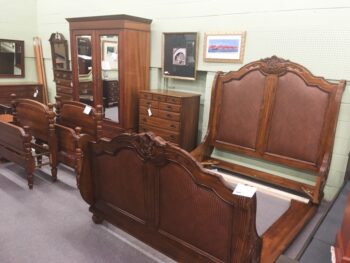 The last picture is from our showroom floor where we placed an Antique Wardrobe, pair of Solid Cherry Twin Beds and a very nice carved Kincaid Queen Bed!

These pictures are just some of the highlights from another busy week at Baltimore’s Favorite Furniture Consignment Store! Visit us today to see it all in person!

Pictures taken yesterday, June 19, 2020, show just some of the pieces that pass through our workshop on a given day!

These pictures taken yesterday, June 12, 2020, show just some of the furniture that passed through our dock and prep shop!

Another truck (no picture taken) was unloaded late in the day that includes a Round Dining Table, Harden Highboy, Henkel Harris Silver Chest and Cellarette, 2 Hand-Made Room-Size Rugs and More!

Visit Today to be the first to see these latest arrivals or call the store for prices and details!

This picture taken yesterday, June 5, 2020, has a group of furniture waiting to be prepped for our showroom floor. In-Store shoppers can buy things as they are unloaded from our trucks! Stop in often to see the new daily arrivals!

Baltimore’s Biggest & Best Furniture Consignment Shop is back in full swing and ready to make your house a home!

You may have heard that the county has given retailers the ‘green light’ to open (with restrictions) our doors to customers again! That means everyone will have an opportunity to buy some Great Consignment Furniture right from our dock.

The picture taken here, yesterday, May 22, 2020, is of a really nice group of furniture from a Delaware home! The dining table has 3 leaves and a beautiful inlaid top. The pair of matching sofas can be bought by the piece or as a pair! There are also inlaid pembroke tables, a mahogany coffee table and more! Better still, these pieces are in excellent condition and ready to be taken home today!

Our dedicated staff continues to work behind the scenes pulling sold piece off of our showroom floor and replacing them with carefully selected consignment furniture in a variety of styles! 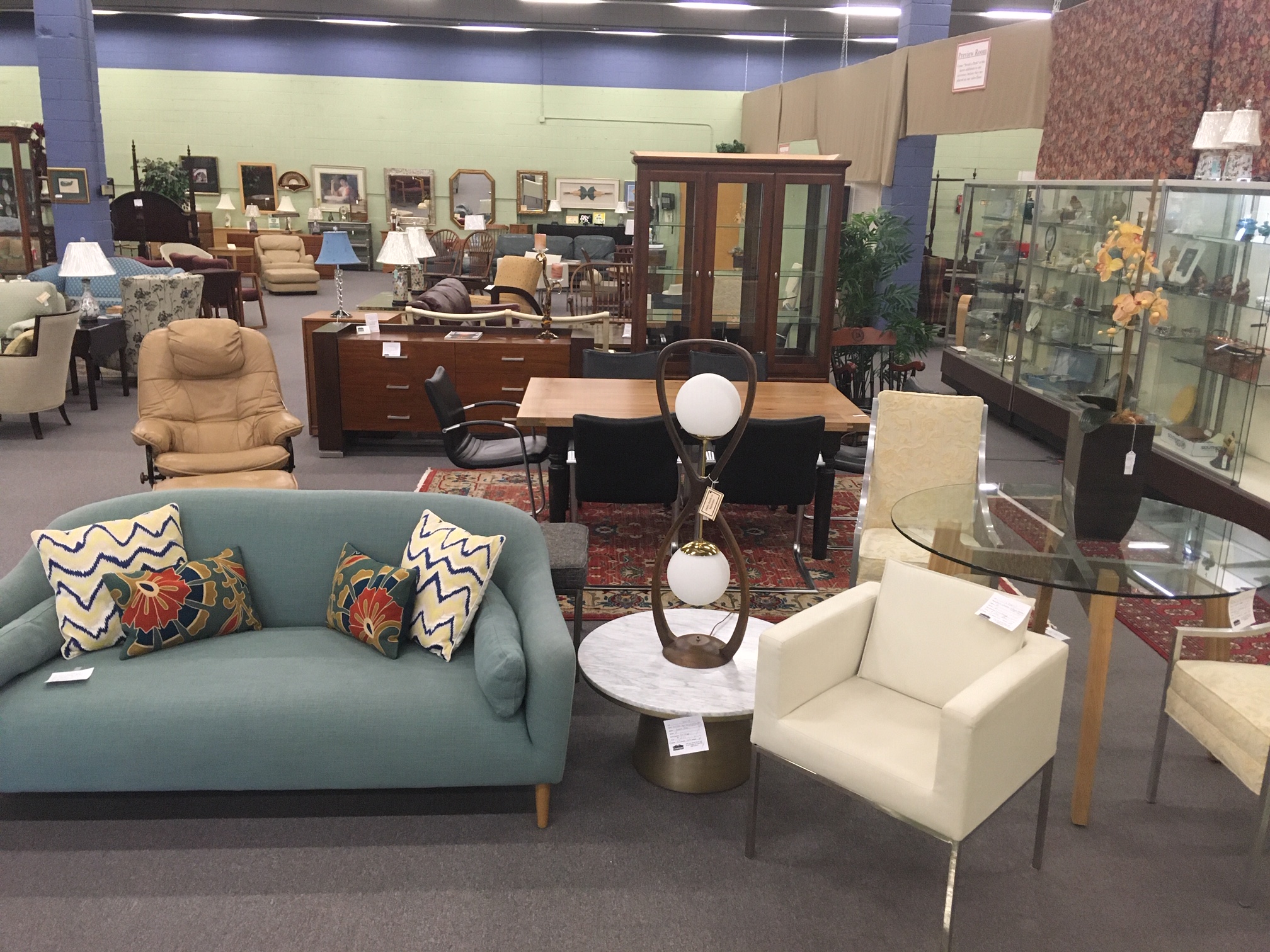 This picture taken yesterday, April 17, 2020, shows a newly arrived group of contemporary styled pieces. Makers include Crate & Barrel, Versa for Thrive and West Elm. We will continue to work hard to update the website with each individual piece. In the meanwhile, if you see something you like, call the store for prices and buy it right over the phone!

Carefully working through the Covid Crisis, we still have clients that have to move, thus parting with their much loved furniture. That means we’re still bringing in pieces on a limited basis as we continue to work behind the scenes!

These Modern Dining Pieces are by Skovby, a very desirable Danish maker. Please call the store Tuesday-Saturday from 10am to 5pm to get more information.

We Promise You’ll Love It! 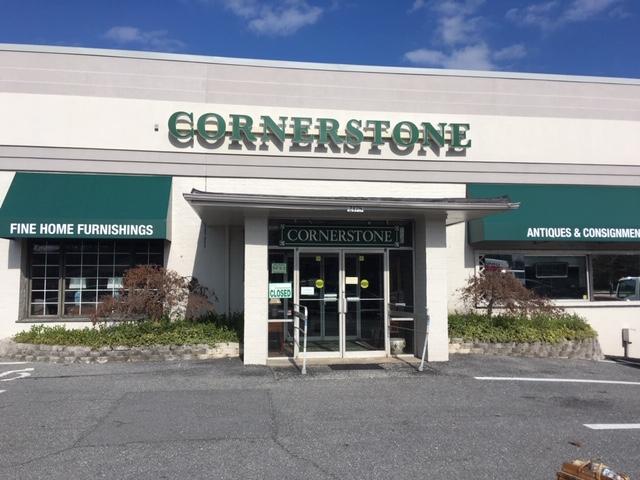 Shop by Phone and We’ll Describe items in Detail!

We’ve been selling to customers all over the country (and beyond) for years! Our experienced team members will explain everything you need to know so that you’ll be thrilled when you come to see your new piece in person! Better still, we back it up with a full refund guarantee!

Even with our doors having to be closed to foot traffic, Cornerstone has the Biggest and Best Consignment Home Furnishings in the Baltimore and Washington DC area! Better still, we’re using this “down time” to update our website with even a wider selection of our inventory! That means you’ll now be able to shop our Rugs, Paintings, Prints, Porcelain, China, Lamps and Collectibles from the comfort of home!

Call the store to talk about your favorite piece and buy it right over the phone! 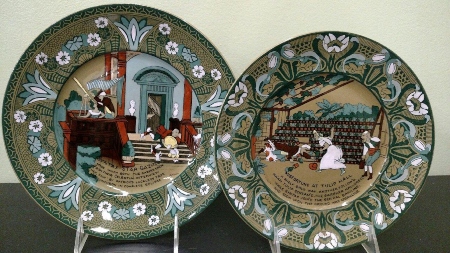 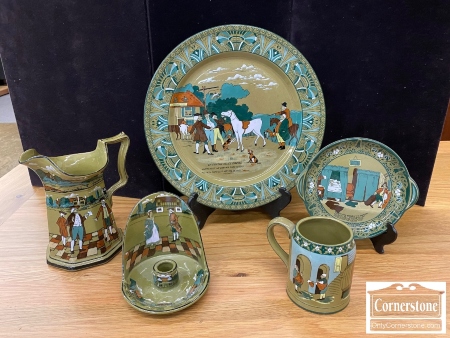 Last day to Save, Saturday- March 28, 2020! Email Club Members got a jump start yesterday. (Join our “Email Club” by using the “Buying” tab on our website!) The Sale is now open to all of our customers to buy any item in the store and save an additional 10%. No limit to how many items you can buy or how much you can save! 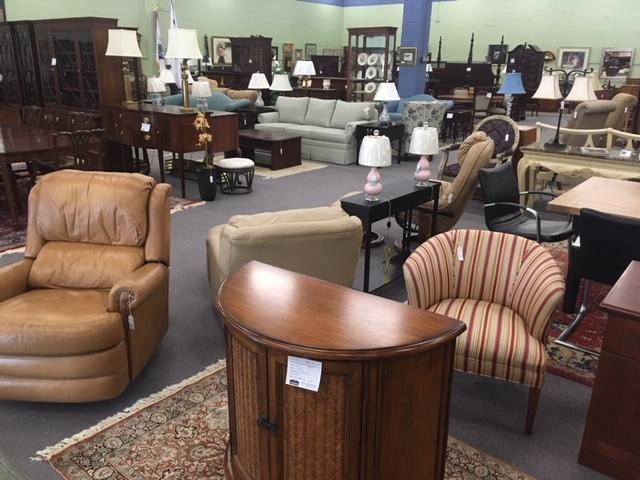