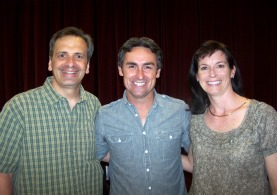 Cornerstone owner Ted Drabik and his wife Mary enjoyed an evening out. Call it a “busman’s holiday”, but when Mary heard that Mike Wolfe (Host of History Channels “American Pickers”) would be speaking at the Penn State York campus, she couldn’t resist getting tickets for the fun-filled event. Mike was just as charming as he seems on tv, and told stories of the almost five year struggle to get his show on the air, as well as many behind the camera stories from the series.

Ted was able to share some of his own “getting started” stories with Mike at a meet-and-greet after the show. But as far as an interest in hitting the road to look for treasures? Ted prefers the ongoing relationships he’s able to enjoy year after year by having a retail store. Besides, he’d miss his wife and four girls too much!